These 6 Top Monuments in Rajasthan you won’t regret exploring 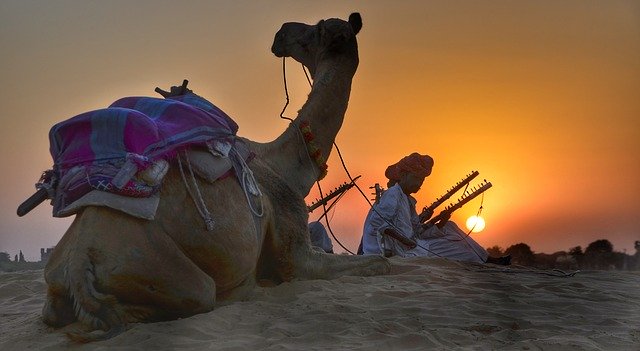 The affluent beauty of Rajasthan is well known across the globe. From the magnificent fortresses to opulent palaces, from azure blue lakes to the golden expanses of desert, everything in Rajasthan is incredibly mesmerizing.

Even after development and elapses of time, the state still preserves its vibrant culture to date. This state is well known for its glorious ancient history. A visit to Rajasthan is no less than a walk through the ancient pages of history unfurling the chivalric tales lived on its land. Come, fall in love with the cultural and historic beauty of Rajasthan.

Here is a list of top 7 monuments in Rajasthan you should visit during your trip:

Situated on the shore of beautiful Lake Pichola, the City Palace stands as the most royal structure in the city of Lakes. It is one of the major attractions in the beautiful city of Udaipur which is visited by thousands of tourists every year. This astonishing palace was built by Maharana Udai Singh in the year 1559 which has been serving as a residence to the royal family then and even now. The building also served as the main building to do administration work for Kingdom. The palace got more royal and splendid as the new successor of Former King done a wonderful job in the construction of new structures within it.  At present the Palace has beautiful Courtyards, royal Mahals, large pavilions, corridors, hanging gardens also it has one museum that houses some of the rarest things of the Rajput era, you can see some fine examples of art and culture here. If you are interested in knowing the rich heritage of Rajput culture with the wonderful architecture, the City Palace is the best option to go for.

Jaigarh Fort is a majestic edifice towering at a height of 500m from sea level perched on a hilltop named "Cheel ka Teela" of the Aravali Range in the Jaipur city of Rajasthan. This huge and stunning architectural wonder was set up in the year 1726  by Sawai Jai Singh II to fortify the Amer Fort. Both Amer and Jaigarh fort is connected through the subterranean passageway. At present Jaigarh Fort has the largest cannon on wheels named Jaivana that offers a spectacular view of the pink city. The fort was never conquered in history, the reason why it is also known as "Fort of Victory". The fort has four major attractions within that includes Laxmi Vilas, Aram Mandir, Lalit Mandir, and the Vilas Mandir. The design and architecture of the fort are truly mesmerizing, and the credit goes to the very talented and famous architecture Vidhyadhar. The fort is built for protecting the Amer Fort that's the reason it is the strongest of all three huge Forts. Jaigarh Fort is also famous for the treasure that was supposed to be buried inside it which was believed to be taken by the government later in the year 1970. For experiencing the rich culture and heritage of the Rajput era, Jaigarg Fort is the best visit for travelers.

The city of Bikaner is home to several majestic forts and monuments and one such amazing heritage monument is Gajner Palace. The beauty of this palace is outstanding, you would be amazed by its beautiful landscapes, architectural designs and the lake view from inside, everything looks so fascinating that you will be lost in the charm of this majestic and prepossessing architectural beauty. The palace was built by the wife of former King of Bikaner Maharaja Sir Ganga Singh and was a hunting lodge for Maharajas. The palace has distinctively designed balconies, terrace, and a complex which has the remains of an ancient historic railway station. This beautiful palace is located just 30 minutes away from the city. Once you reach there, enjoy a walk at the beautiful landscape, go on a desert safari, have a boat ride, and much more fun activity.

In 1976 the palace was converted into a royal heritage hotel which is now owned By the HRH Group of Hotels. The interesting part of suits of the hotel is that rooms are still preserved in their original form, from furniture to four-poster beds, everything is just like the old era and the spectacular view from the balcony adds more charm to the beauty of suits.

Amber fort is one of the famous tourist attractions in Jaipur city, situated on a small hilltop the magnificent fort is constructed with white marble, pale yellow and pink sandstones. The fort has a series of palaces, courtyards, halls, and beautiful gardens. Situated at some 11 km away from the city, the majestic fort is well known for its huge structure, and the architectural style which is a great combination of both Mughal and Rajput culture. The fort was originally constructed by Meenas which was later administered by the Raja Man Singh. The Fort has some main attractions namely the Diwan-i-Khas (Hall of Private Audience), Diwan-i-Aam (Hall of Public Audience), and the Sheesh Mahal (mirror palace- the wall and the ceiling are engraved with thousands of mirror pieces that shines magically in the light of a burning candle). Amber fort is an impressive and beautiful example of Indian architecture and the splendid Maotha Lake just before the Fort adds charm to the beauty of it.

Chittorgarh Fort is one of the oldest forts in Rajasthan, the historical tale of the fort is saddening and beautiful at the same time. The legendry queen of Mewar Rani Padmini is well known for her sacrifice. She with her companions carry out Jauhar (self-immolation) to protect their honor when Khilji defeated Ratan Sen to obtain and marry her forcefully. Apart from the courageous and honorable history, the fort is well known for its beautiful structure which includes places like Rani Padmini’s Palace, Ratan Singh’s Palace, Badal Mahal, and Kanwar Pade Ka Mahal. The fort allures a huge number of tourists every year who come here to witness the marvelous architecture of the fort. The famous Kirti Stambha and the Vijay Stambha are situated here which were made for celebrating the victory of Rana Khumba and in the honor of Jainism respectively. The fort has many temples within where you would feel the spiritual energy, it has a beautiful water kund which looks gorgeous when whole landscapes turn green in the rainy season. The fort itself resides at the Berach river shore, which makes the whole landscape look more splendid and attractive.

The Kumbalgarh Fort is situated in a small town of Rajsamand district and is famous worldwide for its stupendous architectural beauty and affluent history. It is among the most famous and culturally rich monuments in Rajasthan. The fort is well known because it had been the birthplace of Maharaja Pratap- the king of the Mewar. The natural beauty of the fort lies in the surroundings where 13 hill peaks encircle this beautiful fort. Another highlight is the wall around the fort which is huge and 15 km long and is believed to be 700 years old. The wall surrounding the fort is 2nd largest after the great wall of China. The beauty of this fort is at the peak in the monsoon season when the whole landscape turns green and the birds sing. Your journey to royal Rajasthan is partial if you miss out on this amazing fort.